Few knew that as well as publishing the Rushlight I also edited and published the "Ardoyne Freedom Fighter " during the early troubles, plus "The Vindicator" for Clonard area, plus "Scale" for Ballymurphy.. and in the late 1960's "The Pike" the voice of republican Belfast, and, had a hand in setting up "Republican News" in 1970. who says the pen is not at least as mighty as the sword. ? It was on the evening of the 4th December 1971 I was returning to the A.1 Taxi Deport in York Street whom I was driving for at the time. Along North Queen Street I came and turned right into Great Georges Street past the side of McGurk’s Bar, I got about another 200 yards when a huge bomb went off, at that time you had heard so many there was no question of you wondering what that big bang was. I stopped the car almost immediately, I could not have drove on for within a split second the whole air was filled with dust and smoke, I couldn’t see out of the windscreen, or indeed any window of the car. I got out of the car and walked back up toward North Queen Street where the bomb seemed to have exploded, I could see nothing with the dust filled air but I could here feet running and screams. Whether it was from people wounded in the bomb or screams of shock of people arriving at the horrific scene I couldn’t say. I got to the corner and where McGurk’s Bar stood just two minutes ago there was a waste ground with a big heap of rubble, bricks dust and protruding pieces of timber.

Crowds gathered in the deserted street that I had just drove down what seemed like only seconds before, there were men and women from nearby houses and police army ambulance and firemen poured into the street from every direction only . By then we earlier arrivals had began digging with our hands and throwing bricks from the pile out onto the street behind us. On the spot where I and another guy were digging, which would have been close to where the door of the bar had been, we soon came upon one of the buried people, a man, who had obviously been in the bar at the time of the explosion. Together we lifted him out from the debris, the other fellow took his arms and shoulders and I his lower body , one arm around his waist and the other, I thought, under his legs at the knees, but I soon discovered he had only one leg, the other lay somewhere buried in the debris. The strange thing is I can’t say I was ‘horrified’ by this discovery, because events and the necessity to keep digging overtook any personal feelings, thoughts or emotions. He was a young man and seemed conscious so I asked him his name, and he murmured Roddy Corley, I for some reason thought he was saying Rody McCorley, the name of an Irish patriot who was executed back in 1798, and therefore thought he was rambling in shock. I later learned that his name was indeed Roddy Corley, I kept in touch with him through the remainder of his short life. I witnessed a particularly sad and tragic incident while in his company about a year later, but I don’t think here is the place to tell it of it. As for the other fellow who helped me extricate Roddy from the ruins I have never met him from that day to this, sadly I would not know him if I met him on the street. Fifteen people died in that terrible bomb explosions, often referred to as “The McGurk Bar Massacre ” or “The McGurk Bar Atrocity”, but I always point out that they are two different things, the “The Massacre” was the murder of those fifteen innocent people, “The Atrocity ” was the hurt inflicted on the relatives of the murdered by those in authority who readily jumped to accuse one or more of them of having been responsible for the bombing, the media, British Army, R.U.C and even a leading National M.P. For thirty four years now the members of the victim’s families have had to live with the allegations that their loved ones could have had a hand in their own death and the deaths of the other fourteen people. That they were present in that bar when a bomb was being primed. Or made or waiting for collection to be planted at a target elsewhere but went of prematurely. With all this authorities statements pouring out from “Security Sources” etc is it any wonder that some people readily excepted that it was an “Own Goal”, a sick terminology given to a bomb explosion that went off accidentally among the bombers. John Taylor, a Unionist politician, in that holy of holy places, Stormont, confirmed from “the governments inquires” that it was an ‘Own goal ’, by saying, “forensic evidence supports the theory that the explosion ... Took place within the building.”

Those massacred in McGurk’s Bar that night were.....

In 1975, four years after the bombing, Lieutenant-Colonel George Styles. perpetuated the lie when he wrote in his book, “Bombs Have No Pity”, “...From an examination of the wreckage we worked out an area where the explosion happened and it seemed to be well into the pub. Normally if a pub is attacked the explosion occurs fairly near the entrance. We estimated the size of the bomb at around 50lb of explosive and this would have been a fair weight to carry into a pub undetected. Thus I reckon it was another own goal.

My theory was that a terrorist was instructing some I.R.A volunteers in bomb making when it went off. I pictured the scene as the terrorist and his pupils sat around a table with the devise on the floor between them... We could never be certain that is what happened but it is the theory that fits all the known facts”.

There was no wide wave of sympathy for the families of the victims as there was and still is for those of the more recent outrage, “The Omagh Bombing”, nor indeed was there to the family of the Quinn family whose little boys were incinerated by a loyalist fire bomb at Ballymoney, which at times points to a sick and manipulative society and manipulative that can be so selective in their condemnation and offering of sympathy. “Irish Times”

One “well informed” reporter even said, from “information from a reliable source ”, that a Catholic man found shot dead in the Market area of Belfast a few days after the bombing had been executed by the Provisional I.R.A because he had been the man who failed to turn up at McGurk’s Bar to pick up the primed bomb. Of course this turned out to be rubbish, and to be fair, the first reporter to rubbish this further attempt to perpetuate the “Own Goal” theory was David McKettrick of the “Irish Times”, he also placed the blame fairly and squarely at the feet of the U.V.F, this was years before a guy called Campbell had been charged and admitted he was the driver of the car that brought the loyalist bomb squad to McGurk’s Bar, the bombers themselves never were caught, or should I say, arrested, there is a difference. At one point a shadowy group called the “ Empire Loyalists ”, a name of convenience known apparently to have been used by the U.V.F at one point claimed responsibility, but it was strangely dismissed as a ‘crank’ claim?. Campbell was also charged with the shooting dead of John Morrow, a Catholic man in Farnham Street, Ormeau Road, 4th February 1980.

When one considers Lt. Col. Styles ‘theory’, he is plainly saying since none of the survivors were charged with involvement then four or five of the victims of the McGurk’s bombing were involved with the bombing conveniently among the dead were the guilty! And the dead can not defend themselves against the scurrilous and malicious remarks, and their loved were ones left to carry ‘guilt’.

The media, years later and to this day defend their stance by saying they only acted on information given by them by reliable authorities sources, this is “investigative journalism” ?

It may all now be accepted that a grave error was made although the flood of apologies to the families from all concern do not match the ready flow of accusations heaped on those fifteen innocent people.

Never once was the other strange circumstances surrounding the bombing ever published or aired in the media, look back to the events in Belfast that evening of 4th December 1974....

Consider how easily that loyalist bomb was delivered to the bar... On that night security was at its highest, due to the fact that three top republican prisoners, Martin Meehan, “Dutch” Doherty, and Hugh McCann had escaped from Crumlin Road Prison. These were no low key republicans, they were major figures in the fight for Irish Independence and as such the British had pulled out all stops to counteract the propaganda value of the escape by quickly catching the three, as I am sure anyone would agree they would try. One could not drive 400 yards without running into a road check and having the vehicle thoroughly searched and yet a loyalist car containing four men and a 50lb bomb(according to Lt. Col. Styles), was able to cruise through all that security to plant its deadly luggage, then returned safely to their base. Not one description was gathered of any of the other men in the car, not even from the driver?, it seems the U.V.F were invisible that night. Is it any wonder people suspected collusion between the ‘security forces’ and the Loyalist. 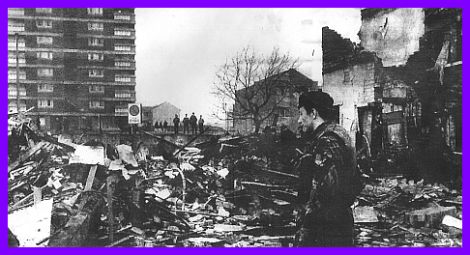